# Line comments are allowed! They can always be round-tripped as long as data
# elements are only modified, not added or removed.
### This is a doc comment. It can always be round-tripped.###
# Only one doc comment is allowed per data element; another couldn't be here.
"quoted key with \x5C escapes" = 'quoted value with \u{5C} escapes'
`literal key without \ escapes` = ``literal value without `\` escapes``
# ASCII identifier-style strings are allowed unquoted.
# Unquoted Unicode identifiers can optionally be enabled.
unquoted_key = unquoted_value
inline_dict = {key1 = value1, key2 = value2,} # Trailing commas are fine.
inline_list_of_ints = [1, 0x12, 0o755, 0b1010] # Hex, octal, and binary!
list_of_floats =
* 1.2e3
* -inf # Full IEEE 754 compatibility. Infinity and NaN are not excluded.
* 0x4.3p2 # Hex floats, to avoid rounding issues.
wrapped_string = """string containing no whitespace lines in which line breaks
are replaced with spaces, and "quotes" are possible by via delimiters"""
multiline_literal_string = |```
A literal string in which linebreaks are kept (as '\n')
and leading indentation (relative to delimiters) is preserved,
with special delimiters always on lines by themselves.
|```/
multiline_escaped_string = |"""
The same idea as the literal string, but with backslash escapes.
|"""/
key1.key2 = true # Key path style; same as "key1 = {key2 = true}"
|=== section.subsection # Same as "section = {subsection = {key = value}}"
key = value
|===/ # Back to root level. Can be omitted if sections never return to root.

Now that the requisite XKCD reference is out of the way, why BespON?

A Python implementation is available now. It may be installed via

The bespon package for Python supports loading and saving data. There is also round-trip support for modifying keys and values while keeping formatting and comments. For example,

This illustrates several of the round-trip capabilities.

The development version of the bespon package already provides several additional round-trip features that are being refined for the next release. For example,

There is a syntax highlighting extension for Visual Studio Code. It has been posted to the Visual Studio Marketplace, so it can be installed with the built-in extension manager.

There is a language-agnostic test suite, which the Python implementation passes.

One of the goals for BespON is "acceptable" performance even when completely implemented in an interpreted language. So far, the pure Python implementation is promising. It contains minimal optimizations (avoidance of globals, use of __slots__), and has significant overhead since it saves detailed source information about each data object to support round-tripping and to provide detailed error messages. In spite of this, when decoding under CPython it can be only about 50% slower than PyYAML using LibYAML, the C implementation of YAML. Under PyPy, the pure Python implementation can actually be significantly faster than LibYAML – it can even be within an order of magnitude of json's speed under CPython.

The decoding benchmark data below was created using the BespON Python benchmark code under Ubuntu 16.04. All data was collected with Anaconda Python 3.6.1 (64-bit) except that designated with "PyPy," which used PyPy3.5 5.7.1 (64-bit). PyYAML was tested with its C library implementation (CLoader) when available. Package versions were bespon 0.2.0, PyYAML 3.12, toml 0.9.2, and pytoml 0.1.13, along with the built-in json module. 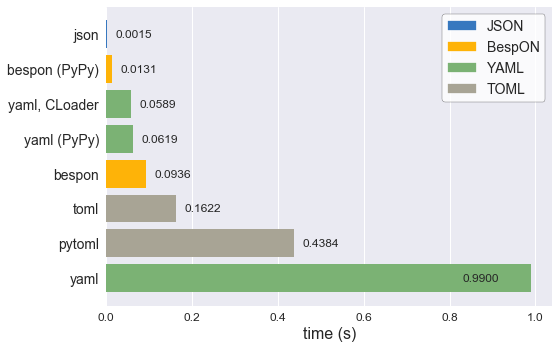 The benchmark data should not be interpreted as making a definitive statement about BespON performance under Python, since that will depend on the nature of specific data sets and the features used to represent them. Nevertheless, it does indicate that BespON performance can be competitive with that of similar formats.

While changes are still possible, all current features are expected to be stable. Development is currently focused on refining existing features and adding more powerful round-trip functionality.